The elliptical gall is created by the larva of a moth (Gnorimoschema gallaesolidaginis) called the goldenrod gall moth. Donald Stokes in A Guide to Nature in Winter relates that the moth lays it's eggs on the goldenrod in the fall. The eggs hatch out in the spring and then larva finds a new growing goldenrod and burrows into the stem where it develops during the summer unless some other insect, such as an ichneumon wasp, lays its eggs in the moth larva and kills it. In any case, the elliptical gall is usually empty by late summer unless, or until, some other insect crawls in for protection. Something interesting to look for is the size and shape of the opening in the gall. The moth grub, according to Anna Comstock in Handbook of Nature Study, cuts a bevelled oval hole before pupating. The grub fills the hole with silk and plant parts. Because the bevel is toward the outside, it's easy for the emerging moth to push its way out but very difficult for any other insect to push the filling in before the moth emerges. If all goes well, the winter gall may only contain the red-brown pupal skin of the moth. Other winter findings, according to Donald Stokes, may be remains of wasp cocoons, spider egg cases, bees, ants, beetles, or thrips. (The gall which I opened contained only the red-brown pupal skin of the moth.) 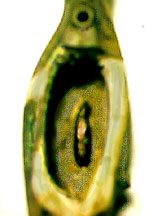 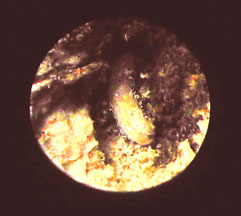 Back to Index page.